Tiffany & Co., Cartier, Harry Winston – all famous jewelers and household names. We see their designs on the red carpet, along with Boucheron, Fabergé, Piaget, and many more. These companies are more than just brand names; they were the passion and brainchild of people who loved high quality, stylish jewelry, and who wanted to to make their mark on the burgeoning industry. In this special blog series, we’ll explore the history of these famous jewelers and how they began their journey. Along the way, we will discover some fascinating tidbits, such as:

We know the names and have heard of the legacies but it’s time to learn more about who these famous jewelers were. Each story begins with a dream and determination. Each story inspires us to appreciate the brilliance that went into creating their empire. And each story gives insight to the inspiration of timeless designs.

For the first post in our series, we’re going to take a closer look at a giant in diamond jewelry, Harry Winston.

The legendary Harry Winston was born on March 1, 1896. Winston’s father, Jacob, had a small jewelry business and from a very young age, Harry would help out in the shop. The story goes that at 12 years old Harry Winston struck figurative gold when he bought a two-carat emerald from a pawn shop for 25 cents. Recognizing its value, he turned it around and sold it within two days for $800. 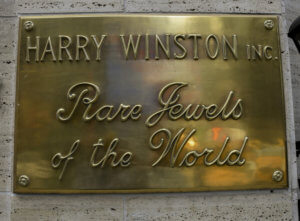 When he was 19 years old, Harry Winston used $2,000 from savings and opened the Premier Diamond Company. Within 2 years he had created a company worth $30,000. Misfortune hit when one of his employees ran off with all of his stock and cash.  Undeterred, Winston used what he had left to purchase jewelry from estate sales. He took the precious stones from their outdated settings and refashioned them into modern styles, selling them at a large profit. His fame grew when he acquired Arabella Huntington’s renowned jewelry collection. By 1932, his wealth and business were rebuilt and Harry Winston closed the Premier Diamond Company to open Harry Winston Inc. Winston continued designing elegant and timeless pieces with the estate jewelry.

Using his eye for a great sale, Harry Winston continued his success in the diamond industry. In 1935 he bought the 726-carat Jonker Diamond, for $700,000. This famous diamond was the 7th largest rough diamond on record. He sent it to his New York headquarters via US post for the sum total of 64 cents. The stone was cut down into twelve individual stones with the largest one being a 125.35-carat emerald-cut diamond. Following the purchase and sale of this diamond Harry Winston’s fame grew worldwide.

The years moved on and with them Harry Winston’s continued good fortune. Highlights of these years include the 1940s, when Harry and his designers developed the cluster technique where the style of the piece is based on the individual diamond rather than the metal setting, maximizing the brilliance of the stone. This design continues today, over 70 years later. 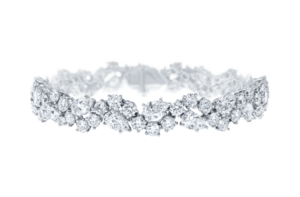 Winston on the Red Carpet

We all look forward to the jewelry the stars wear at red carpet events. Many will borrow high fashion pieces, a tradition started by Harry Winston when he lent diamonds to Jennifer Jones in 1944 for the Academy Awards. Jennifer won Best Actress that evening. This move gave him the title of “Jeweler to the Stars.”

“Talk to me Harry Winston! Tell me all about it!” sings Marilyn Monroe in the famous song “Diamonds Are A Girl’s Best Friend” from the movie Gentlemen Prefer Blondes. The movie was released in 1953, over 20 years after Harry Winston opened his shop and was considered the “King of Diamonds”.

Diamond Gifts to the World

In 1958, Harry Winston gave a gift to the world by generously donating the Hope Diamond to the Smithsonian Institution in Washington, D.C. With the Hope Diamond the museum was able to establish their National Gem Collection. 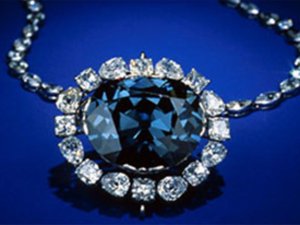 In 1966, Harry Winston purchased a 241-carat rough diamond. He cut that into a flawless 69.42-carat pear-shaped diamond. The diamond was sold to Harriet Annenberg Ames. She auctioned it to Cartier who sold the diamond for over $1 million to Richard Burton, husband of Elizabeth Taylor. Renamed the Taylor-Burton diamond, it was originally set in a ring and later reset into a necklace.

After a lifetime of working in the diamond industry Harry Winston passed away in 1978 at the age of 82. His legacy continues through the jewelry of Harry Winston Inc. Today you can see his work worn by royalty, celebrities and in museums as timeless art pieces.