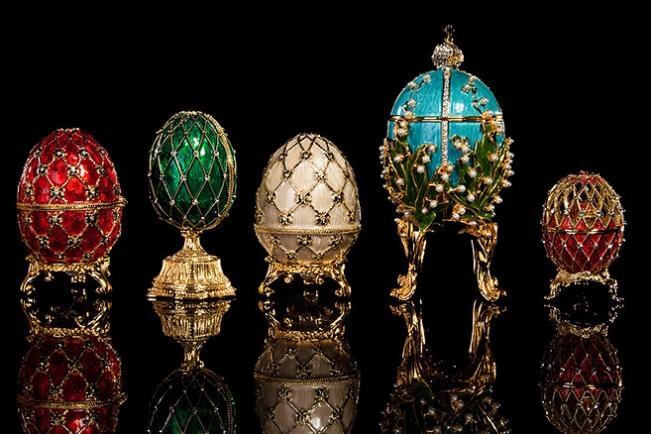 The Man Who Created The Egg

In 1885,   Tsar Alexander III commissioned Faberge to create an Easter egg as a gift for his wife, Empress Maria Fedorovna. With this simple gift, the Faberge Imperial Egg Collection was born. The first egg was called the Hen Egg. Inside a white enameled shell rested a solid gold yolk. Inside the yolk sat a multicolored gold hen, which hid a tiny diamond replica of the imperial crown with a small ruby pendant. Empress Maria loved the gift and the Tsar charged Faberge with the job of creating a new egg every year.

Faberge was given complete creative freedom, even the Tsar did not know what the egg looked like until the big reveal. The only requirement was that the egg must contain a surprise. After Tsar Alexander III passed away, his son Nicholas II continued the tradition and gave his wife, Empress Alexandra Fedorovna, and his mother, Dowager Empress Maria Fedorovna, a custom Faberge egg each year. The eggs became popular, and private clients began requesting customer eggs, including the Rothschild family, the Duchess of Marlborough, and the Yuspovs.

Where It All Began

Peter Carl Faberge was born on May 30, 1846 to Gustav Faberge, a Baltic German jeweler, and Charlotte Jungstedt. Peter Carl’s education took place during his Grand Tour of Europe. He studied under the tutelage of respected goldsmiths in Germany, France, and England, and took a course at Schloss’s Commercial College in Paris.

In 1872, Peter Carl returned to St. Petersburg where he had first begun his education. He married Augusta Julia Jacobs and began working in the family jewelry business under the mentorship of his father’s trusted workmaster, Hiskias Pendin.

Peter Carl took over running the business when Hiskias Pendin passed away in 1882. That year Peter Carl was also awarded the title Master Goldsmith. His reputation was so great that he did not need to take the normal three-day examination. 1882 was also the year that Peter Carl’s much younger brother, Agathon Faberge, joined the company. Working with his brother, Peter Carl created a replica of a 4th century BC gold bangle from the Scythian Treasure in the Hermitage for the 1882 Pan-Russian Exhibition in Moscow. The replica caught the eye of the Tsar who could not differentiate between the original and the work of Peter Carl. He declared that the replicas should be displayed in the Hermitage as examples of incredible Russian craftsmanship.

On May 1, 1885 Peter Carl was awarded the title of Supplier to the Court by Tsar Alexander III. This gave Peter Carl complete access to the Hermitage Collection giving him the opportunity to study it and gain inspiration for his future collections. The jewelled bouquets of the 18th century goldsmiths, Jean-Jacques Duval and Jeremie Pauzie, were very influential as well as his appreciation for Japanese art. With those in mind Peter Carl revived the lost of art of enameling and giving proper focus to every aspect of the stone to use it to its greatest advantage.

In 1900, Faberge was honored by representing Russia at the 1900 World Fair in Paris, and was awarded a gold medal for his work. Faberge was recognized as a master and was appointed by France as a knight of the Legion of Honour. This notoriety brought in more orders and clients.

The House of Faberge: A Jewelled Legend Lost in History

Heartbroken from the loss of his company, Peter Carl moved to Germany where he fell ill. He passed away on September 24, 1920. In 1924 Peter Carl’s sons Alexander and Eugene opened Faberge et Cie in Paris, continuing the name and legacy of Peter Carl Faberge.