The Science of Light Beauty - Sarine钻石证书-4C标准钻石原石及光性能火彩新零售溯源技术珠宝趋势

Understanding the Role of Light Performance in Diamond Grading

Unlike other gemstones, the diamond’s appearance is a direct consequence of the way the stone interacts with light. Direct measurement of a diamond’s performance in the light provides a holistic approach to diamond grading that combines all parameters that affect diamond beauty, such as proportions, clarity, color and symmetry. At the same time, light performance measurement presents an objective standard of what has always been a debatable evaluation, subject to the perception of the individual viewer. This creates a new and revolutionary way for diamonds to be valued and appreciated, by sellers and buyers alike.

The diamond’s appearance is based on two optical attributes:

The Key Determiner of Light Performance

Cut and craftsmanship is the vital determiner of a diamond’s light performance. In addition to natural inclusions and flaws, difference in proportions is indicated in the difference between each individual diamond’s appearance.[iii]

Throughout the history of diamond cutting, from point cut, single cut, Mazarin cut, old mine cut, old European cut to the current modern cut, the effort to extract beauty from the diamond has been ongoing. However these historical efforts to perfect the diamond appearance, including Marcel Tolkowsky’s famed “ideal cut” model, were conducted with the limiting nature of 2D graphical and mathematical imaging available at the time, which only took into account 16 main facets and the table.[iv] Modern advents in computerization and 3D modelling have enabled the analysis of diamond cut to reach new depths of precision.

Much research of diamond cutting traditionally defined three concepts of a diamonds appearance: Brilliance, Fire and Scintillation, and the relational balance between the three.[v]  In 1919, Marcel Tolkowsky published his calculations, taking into account both brilliance and fire. Limited though they were when compared to modern standards enabled by advanced computerization capabilities, Tolkowsky’s calculations were a breakthrough that formed the basis for all brilliant cut modifications and standards.[vi] With Japanese research in the 1970s and 80s resulting in the development of the Firescope, an analysis of the optical performance of all 57 facets of the diamond enabled further progress towards an Ideal cut that displayed even higher levels of Brilliance and Fire.[vii]

Through the years, there have been many cut standards devised and published, such as American Standard, Practical Fine Cut, Scandinavian Standard, Ideal Brilliant, Parker Brilliant and more. Cut grading is addressed independently from the other 3Cs (Carat, Color and Clarity). Most cut standards determine the cut grade by craftsmanship factors, particularly the symmetry and polish quality grades.

Some of the more renowned approaches to determining cut grade include:

There are several grading standards that use the linear approach. The linear approach is based on a selected parameters. For example, Excellent cut denotes table proportion between 53% and 59%, or Very Good cut between 50% and 53% and also between 59% and 63%.

The same grading is conducted for all proportion values participating in the grade analysis.

The final grade is the lowest grade found for all parameters.

Some laboratories added limiting factors, i.e. the sum of the crown angle and pavilion angle for Excellent cut should be between 78º to 82º.

The GIA Cut Grading approach is based on computerized calculations of the proportions (average values) of the diamond in terms of Brilliance, Fire and Scintillation. Factors are given to each one of the parameters (the factors are not disclosed). The result of this calculation is a figure the expresses the “beauty” of the diamond. These calculations are conducted for an entire set of proportions numbering in the tens of millions. This range of figures is divided into 5 grading groups, Excellent to Poor.  Note that there are other parameters added to determine the final grade, such as symmetry and polish.

AGS cut grading[viii] uses the actual 3D model of the diamond, rather than average parameters used in other standards. Based on the 3D model, the algorithm calculates two groups of parameters:

The total grade is calculated based on these parameters. The grading is denoted by numerical values, with 0 as the best cut grade. The AGS also has a proportions-based cut grading system.

The light performance grading system was developed based on analysis of more than 23,000 diamonds in several countries and from multiple manufacturers and retailers. The variations and distribution of the diamonds researched covered most of RBC diamonds that comprises the diamond trade. Diamonds measured were sourced from manufacturers that are known for providing the best cut diamonds, as well as from manufacturers of diamonds with poor cut grade and clarity of I3.

Such a broad variety and volume of diamonds enabled the acquisition of an enormous pool of data about light performance, and specifically the interdependency of light performance and clarity or cut grade.

There are two methods for measuring and determining the light performance of diamonds:

The direct approach requires generating a hemispherical environment for the diamond that provides a 360-degree setting in which light performance features can be observed. The environment must not be static, as the appearance of the diamond varies depending on the observation point, stone movement and lighting changes.[x]

The GIA attempted the use of multiple patterned hemispheres for testing the brilliance of diamonds during its cut grade research.[xi] The patented hemisphere designed by Sarine (see fig.1) addresses the four parameters defined as affecting light performance.  Featuring a zigzag of black and white patterns of equal area, the hemisphere rotates during the measurement sequence so part of the light hits the white portion of the hemisphere and is returned as diffused white light to the diamond, and part of the light is absorbed by the black portion of the hemisphere. 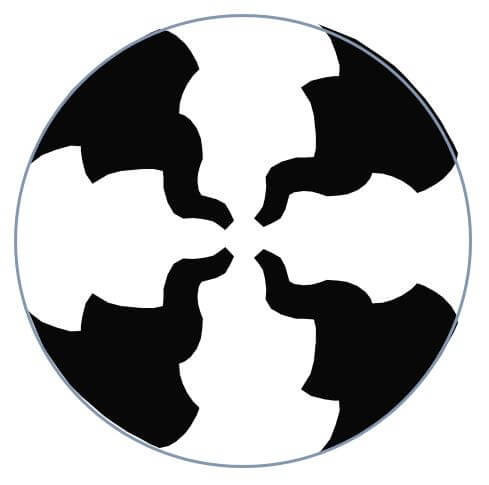 The system is comprised of the following main components: 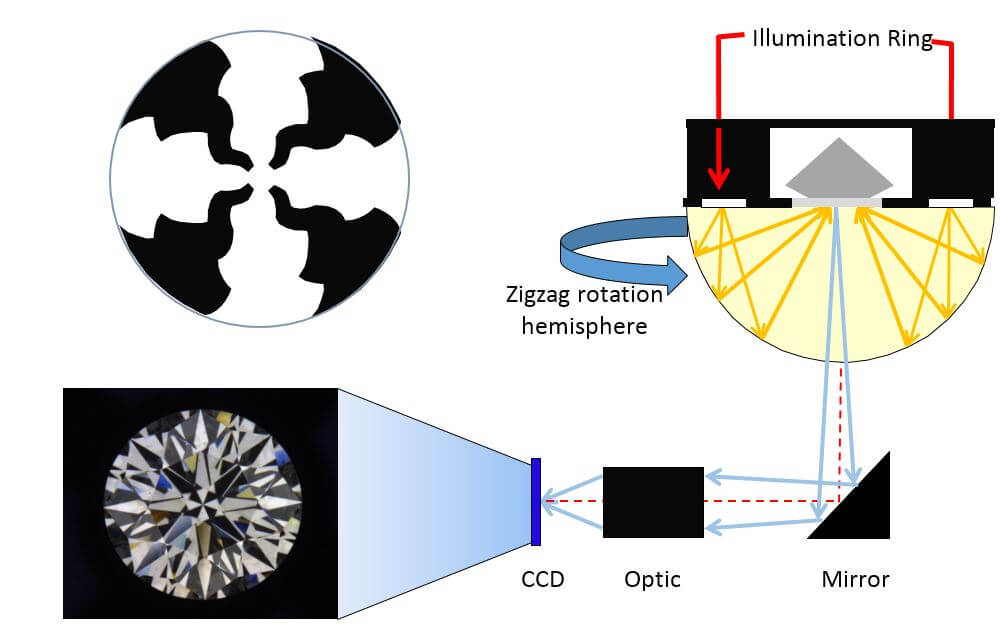 The system records three components for each pixel of the images taken by the CCD camera. These components are known as YUV.

Here is a typical UV plate: 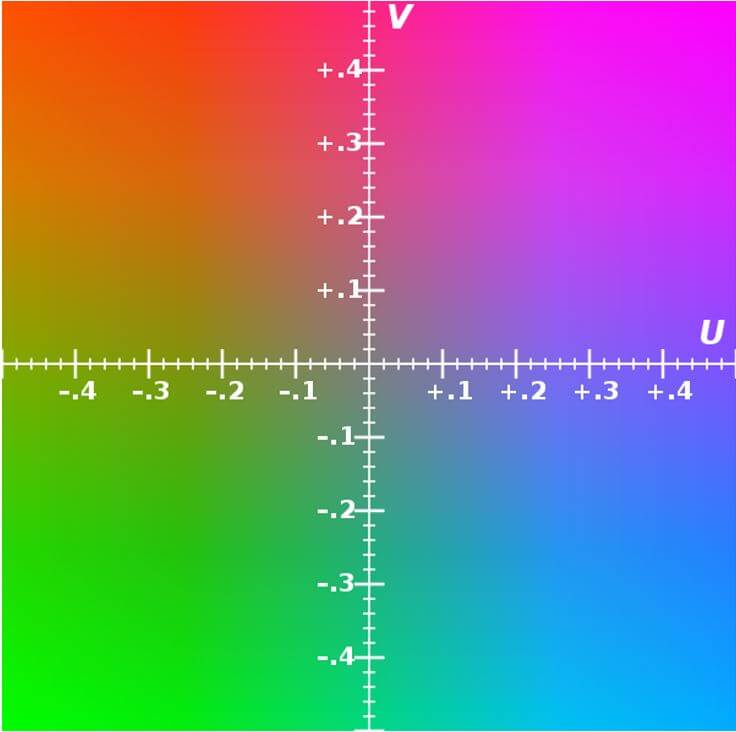 Based on these pixel component recordings, the Light Performance system defines and measures four parameters that cover all aspects of a diamond’s light performance. They are Brilliance, Sparkle, Fire and Light Symmetry.

Brilliance is defined as the intense bright light that shines from the diamond. Brilliance is calculated as the average gray level (luminance or Y component) of the composition image (the image of the diamond composed of all the images taken by the CCD camera) as recorded inside the outer edge of the image. The higher gray level will provide a higher brilliance level.

The images below demonstrate five levels of brilliance. 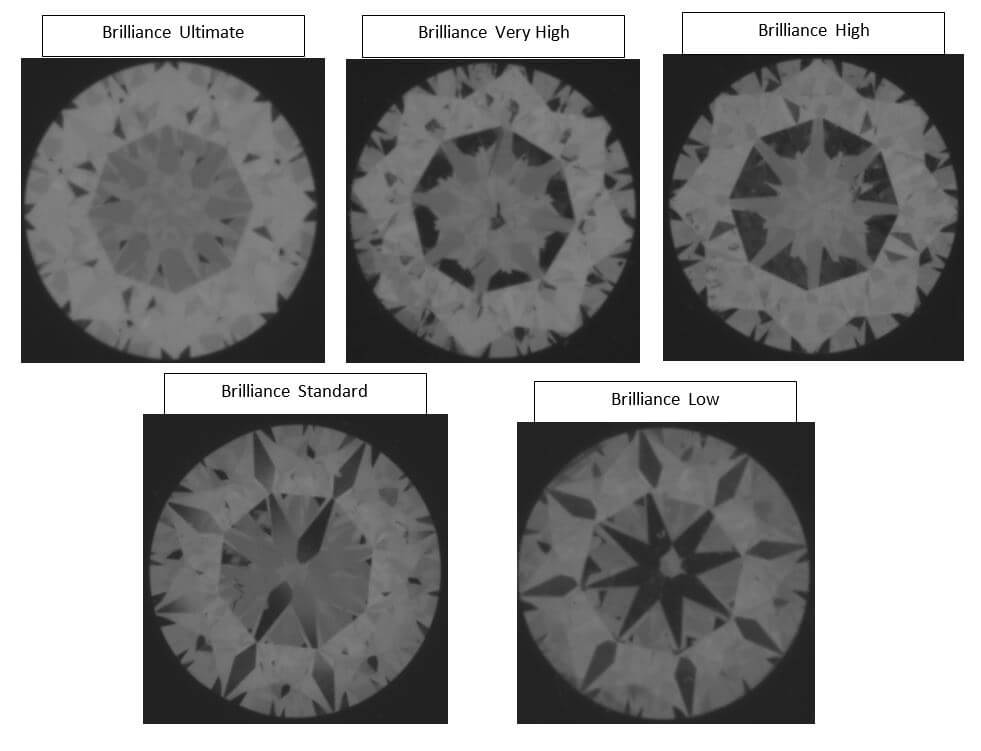 Light Symmetry is defined as the measure of light distribution in the diamond, based on cut and inclusions. Light Symmetry is calculated by composing one gray level image from the multiple images recorded by the CCD camera. The mean gray level is calculated by an algorithm which measures the luminance or the Y component values of 8 corresponding pixels from the segments, at differences of 45 degrees.

This is repeated for the entire image. The sum of all the sums of all the groups is the symmetry calculation. The higher the value, the lower the symmetry. Note that low symmetry may be a result of non-symmetrical polished facets or the presence of internal inclusions. 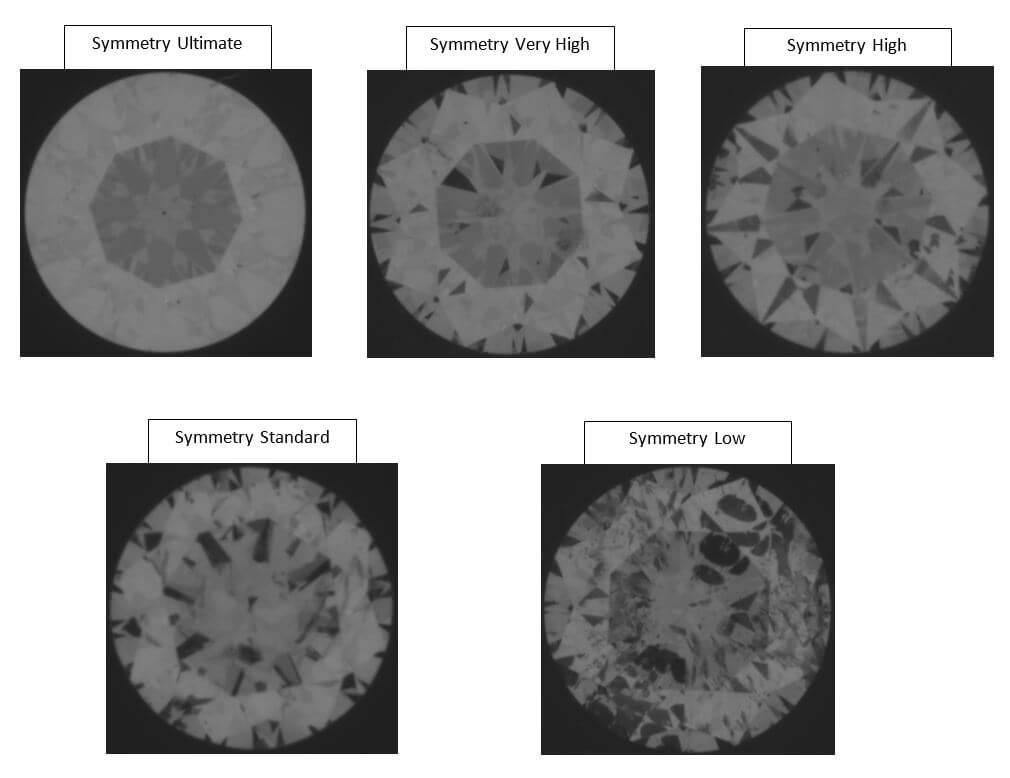 Fire is defined as the vivid colors of the rainbow that radiate from within the diamond. The first step in assessing the diamond’s Fire is assigning a Fire value to each pixel in the multiple images taken of the diamond. This is achieved by calculating the color distance. Then the color distance is assessed as to whether it is greater than the threshold value. If it is below the threshold, this pixel has a Fire value of 0 (see Color Distance 1 in image below). If it is above the threshold, it is a legitimate Fire pixel (see Color Distance 2 in image below). 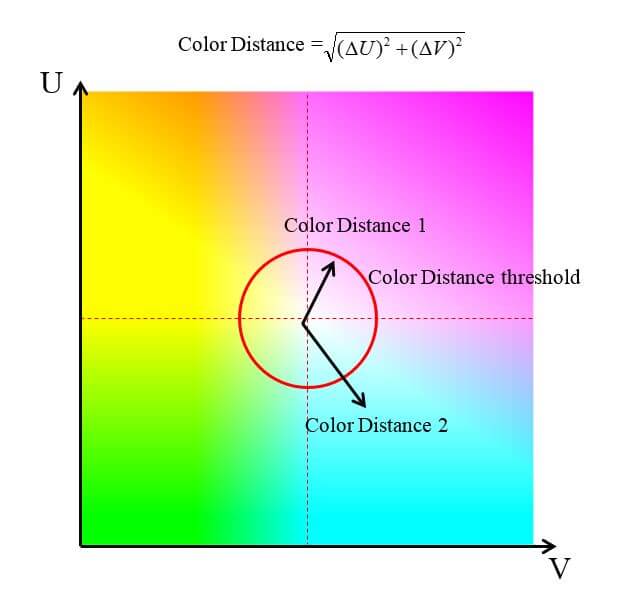 The second step is to note if the pixel belongs to a cluster of pixels, or if it is an isolated pixel that may be due to an optical artifact, with no effect to the Fire as perceived. To do so, the system considers only pixels that are part of a large enough cluster. If the pixel doesn’t belong to a cluster, it again receives a Fire value of 0.

Static Fire determines the total Fire effect. Static Fire grading is achieved by calculating the sum of all color magnitudes from all the images, factored by the size of the diamond as measured by the system.  This method is designed to prevent low Static Fire readings for all small stones with a small quantity of pixels.

Total Fire is calculated using the Static Fire and the Dynamic Fire values with different factors.

Sparkle is calculated via measurements of Contrast, Dynamic Fire and Static Fire (with different factors).

The system analyzes changes in the diamond’s appearance due to changes in illumination. Specifically, each pixel is analyzed as to how its gray level (luminance or Y factor) changes under different light conditions, via images taken at different rotation positions of the hemisphere.

If the change is above a certain threshold, the pixel is marked as having a contrast.

By dividing the quantity of marked pixels by the total quantity of pixels in the stone, the contrast is determined. Contrast is higher when the value of the calculation is higher.

A common problem with the 4Cs grading system is the conflict that arises when comparing various diamonds. See the following table; which diamond is the better choice?

Based on these gradings, it is difficult to state with certainty which of the diamonds has better Light Performance.

Although the Light Performance approach entails four parameters, for purposes of trade, it is preferable to present a unified grade that summarizes the diamond’s light beauty. This enables clarity in comparison of two or more diamonds. In cases of diamonds having similar grade, the consumer may look for the diamond that matches his/her personal preferences, such as higher level of Brilliance, or more intense Sparkle.

The scaling of the total grade is based on five grades, with grade divided into sub-grades featuring a star system, from three stars (highest) to one star (lowest).

There are 70 possible grade combinations of the four Light Performance parameters, which can be mapped into the various total grade levels. Here are some examples:

When a layperson is searching for a diamond, the 4Cs information, such as VS2 clarity and G color, is limited in its meaning. In most cases, the consumer is not well versed enough in diamond analysis to comprehend the effect of the size of the culet or the consequence of the small natural near the girdle in the diamond pavilion. The retail customer is actually seeking a diamond with their preferred stone cut and shape, diamond setting, stone quality, stone size and price tag,[xii] rather than a host of ‘technical’ information about the diamond that is more of interest to diamond professionals.

Let’s take an example of two diamonds being sold side by side in a jewelry store:

According to the price list, the first diamond is valued at half the cost of the second diamond. However, when comparing light performance, there may be a case where Diamond 1 in fact outscores Diamond 2. Customers who prefer the light beauty of Diamond 1 over the rarity of Diamond 2 will choose to purchase Diamond 1 at half the price. The light performance grading enables a deeper pricing policy that helps consumers find the best fit according to visual preference and budget, and enables retailers to provide a more focused, personalized purchase experience that meets the needs of the new millennial generation of customers.[xiii]

The Light Performance approach provides objective, technology-based comparison of diamonds. Rather than having to rely on the word of the seller, the wary millennial consumer will receive the technological proof they crave, due to their inherent trust in technology over the salesperson.[xiv]